When we first met in 2016, we started dreaming of buying an old sailboat and restoring it to go on a trip around the oceans. Step by step we have built this project together. When we bought our sailboat in 2019, we realized that we didn’t “just” want to go on a sailing journey, but that we wanted to create a meaning and a sense to our project. That’s when we decided to create our project SEA THE PLASTIC EXPEDITION, a sailboat trip around the Atlantic to raise awareness about plastic pollution in the oceans. We are so happy that you want to know more about us and our project, thanks for being here!

Together with Ocean Eye, we will collect samples during our trip around the Atlantic Ocean. These will be analyzed in their laboratory and will be added to a global open-access database.

Through social networks, workshops with our partners and meetings throughout our journey, we would like to contribute to the global awareness of plastic pollution in the oceans and reach as many people as possible.

To encounter diverse cultures, uncertainties, and to embrace the beauty of landscapes, we hope to discover ourselves and continue to challenges ourselves to grow in skills and as persons through the year and a half of sailing.

OUR ITINERARY AND TIMING

Knowing that due to the seasons, we has to cross from the Canary Islands to the Caribbean in mid-December, and crossing from Bermuda to the Azores in summer, we estimate the total duration of the trip to be a year and a half. Due to the COVID-19, we had to change a little bit our plans and we will not pass true Cabo Verde. We hope that we will be able to continue our trip the way it was planned. But we shall see where it will lead!

By extending our trip to Montreal, we would be the first expedition to make microplastic samples for OceanEye in these poorly mapped areas. Not all oceans are mapped in the same way. Much data has, for example, already been collected in the Mediterranean Sea, while the East Coast of America is much less studied. By doing this extension, to Montreal via the St. Lawrence River, we could collect samples in this area and thus expand the database.

Want to know where we are now ?

Travelling thanks to the wind in autonomy on a 10m sailboat.

Crossing the Ocean twice and improve ourselves in navigation.

Sharing the adventure with teammates during different steps.

In order to be able to carry out this project in the best possible conditions, we estimated that we would need to raise €80,000. Convinced of the merits of our project and for the sake of credibility to our partners, we finance more than half of the adventure on our own funds. It will have taken several years to save this amount of money. However, we cannot cover all of the costs related to preparation, equipment, repairs and the microplastic mission. So we ask help to our partners to be able to repair our sailboat and to acquire the equipment allowing us to collect these microplastic samples: a Manta Trawl, a water flow meter, an anemometer, a speedometer and a speed regulator. We will never thank them enough for their help! We are still looking for new partners, so if you want to join the crew, it’s still time!

OUR PARTNERS
HELP US NOW! 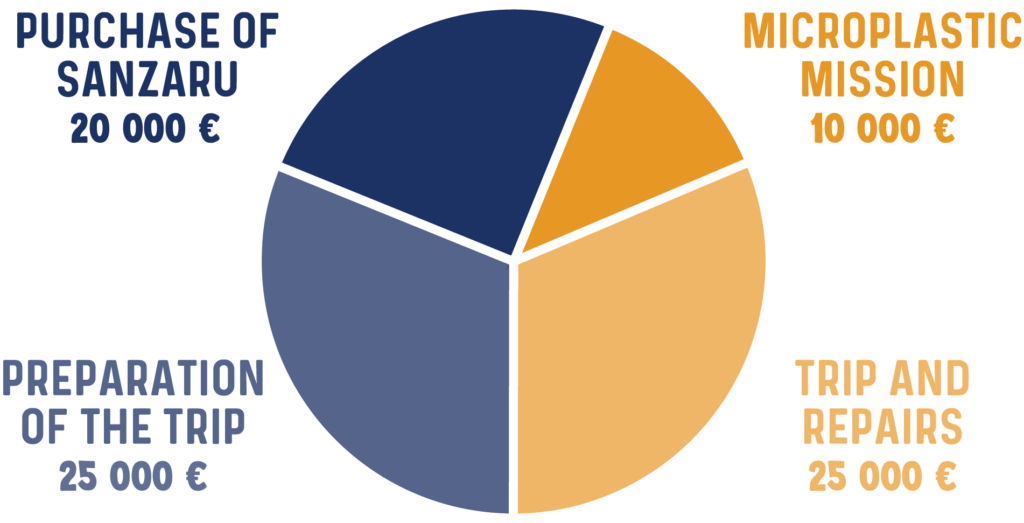 Fight for the things that you care about. But do it in a way that will lead others to join you.

If each of us does the little we can with conviction and responsibility, I assure you that a lot will be done.

THEY TALK ABOUT US !

Here are some great articles and interviews about us and our expedition. Thank you all for your interest in SEATHEPLASTIC!

If you know someone who might be interested in interviewing us or if you work in a newspaper, radio, … don’t hesitate to send us an email, we will be delighted to share our adventure!

9 millions tons of plastic end up in the ocean every year.

More than 5 trillion pieces of plastic are already floating in our oceans.

By 2050, virtually every seabird species on the planet will be eating plastic.

A little anecdote: Our survivor of the oceans

We present you our cory’s shearwater named “Pufpuf” (from “Puffin Cendré” in French), a survivor of the oceans! While sailing between Porto Santo and Madeira, we see something floating on the water. When we look closer, we realize that it is a bird that is struggling to try to fly away but that it doesn’t succeed… We decide to make a ” man overboard ” maneuver to go and save it. After 10 minutes, the manoeuvre is successful, Aline is soaked but we are too happy to have saved this too beautiful bird which was dying of exhaustion. There is no fishing net stuck in its legs and no apparent injury… Probably it is just exhausted and needs to rest! We decide to put him in a fabric bag so that he doesn’t hurt himself and call Aline’s dad who knows a lot about ornithology. He tells us that it is a Cory’s Shearwater, from the Albatross family. He is going to contact a Portuguese biologist friend to see if we could give it to a rescue centre in Madeira. In the meantime, we have to feed him and give him water… Fortunately, we had just caught our first tuna a few minutes before. Pufpuf is lucky to get our first fresh tuna before we even taste it! We really had to force-feed him holding his beak open because he didn’t let himself be fooled! After 2-3 attempts, we find the technique and Pufpuf is delighted. Around 9.30 pm, we finally arrive in Madeira where we anchor in the dark. We are all three very tired, time to go to bed! 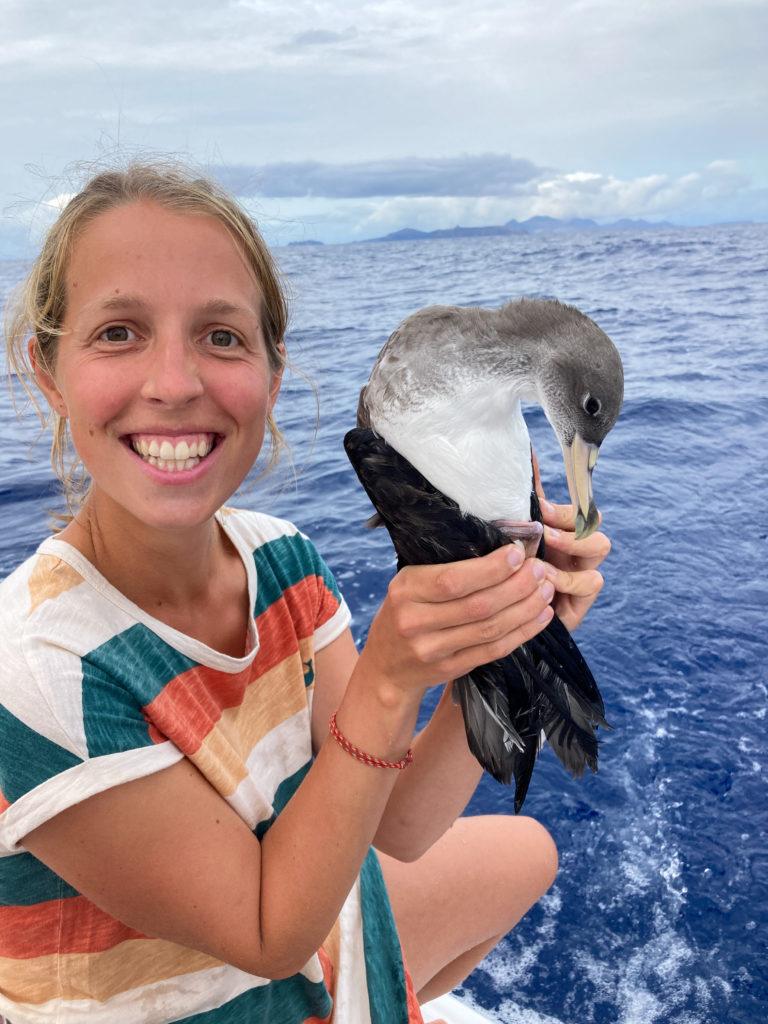 After a good night’s rest, Pufpuf looks better! As he is a bird from the albotross family, he needs to be on the water to be able to fly away. So we decide to release him by “dropping” him on the water. But we quickly notice that he tries to fly away like yesterday… without success. We let him float on the water for 20 minutes but he still can’t fly away and he starts to drift away from the boat. So we decide to go and get him with our dinghy. Arrived at less than 2m from Pufpuf, our engine breaks down and obviously we didn’t take our paddles… Dam jumps into the water to swim the dinghy to the boat… We take the paddles and we go back to get Pufpuf. We spend the day at anchor to take care of Pufpuf. We feed him with tuna, give him water and then let him rest and dry in the sun. He looks good, he’s relaxed, and he’s even starting to clean his feathers (which is a very good sign!). Then we realize that he has a wound on his left wing because he has some blood. We disinfect it because we don’t want it to get infected because his wings are vital to him. We receive the number of the Madeira environmental police via Aline’s dad’s biologist friend. And then we realize that we don’t have network at our anchorage… So we sail to the port of Machico but we get there a little too late, we’ll have to call tomorrow morning! We feed Pufpuf again and then go to sleep. The next day, we wake up, Pufpuf has pooped everywhere so we give him a little bath. He has to look nice because the environmental police will come by this morning to pick him up and take him to their rescue centre, we are so happy. Around noon, a nice man arrives on the boat with a cardboard box to transport Pufpuf. But while analyzing him, he tells us the sad news: Pufpuf is still a baby and his left wing is broken… He explains that unfortunately their centre doesn’t yet have the necessary infrastructure to treat this kind of wound for ocean birds and that they won’t be able to heal him… They will have to sedate him to stop his sufferings. So, it is with teary eyes that we put Pufpuf in the box and the guardian takes him away… We console ourselves by saying that instead of dying of exhaustion alone in the middle of the ocean, he will have lived two beautiful last days pampered on board Sanzaru… We will have done everything we can to save this magnificent bird, but nature will have decided otherwise. We had become attached to this little ball of feathers!