THE PROBLEM OF MICROPLASTICS

We all know that there is a real ecological problem at the moment and that we must act now. But do we really realize how much of an ecological disaster we are facing? We want to begin by sharing with you some shocking facts about our oceans and the plastic pollution:

Each year, 10 million tons of plastic end up in the sea, carried by the wind and current. Though the degradation of the plastic is very slow, plastics break up under the effect of the wind, the water and the sun. The fragments below 5 mm are called microplastics. The one above 5 mm are called mesoplastics. It is estimated that there are 100 million tons of plastic roaming in the oceans!
Sounds bad no?

How to collect samples?

The Manta Trawl consists of a floating metal structure, a net and a “sock”. The sailboat pulls it on the surface of the water to filter out floating particles, including plastics. A sampling protocol must be respected for the validity of the measurement: wind speed less than 20 knots, boat speed less than 5 knots, sampling time of 30 minutes.
The sock is then sent to a laboratory which will analyze it.

Why is it important to study it?

The oceans contain more than 80% of the terrestrial biomass and thus represent the main reservoir of life on earth. However, today we have to face a major environmental problem: the general intoxication of the seas by plastic waste. It therefore becomes imperative that the problem of plastic waste has to be precisely identified and that the extent of this pollution has to be better known. Let’s study those microplastics!

The largest market for plastics today is packaging materials. That rubbish now accounts for nearly half of all plastic waste generated globally—most of it never gets recycled or incinerated.

As of 2015, more than 6.3 billion tonnes of plastic waste had been generated. Around 9 percent of that was recycled, 12 percent was incinerated, and 79 percent accumulated in landfills or environment.

Ocean Eye is a non-profit organization, based in Geneva. They contribute to scientific research by conducting campaigns to collect and analyze samples of ocean surface water, and participates in the collective awareness of plastic pollution and its causes and effects. As one of their volunteer sailboats, we have already collected 39 samples for OceanEye along the journey, and we will continue during the rest of the expedition.

By collecting microplastic samples, we contribute to scientific research. Our geolocated samples are sent to Ocean Eye who count and weigh the particles in their laboratories. The data thus generated is transmitted to the GRID department of the United Nations Environment Program and made available worldwide with its “geodata” geographic information system. 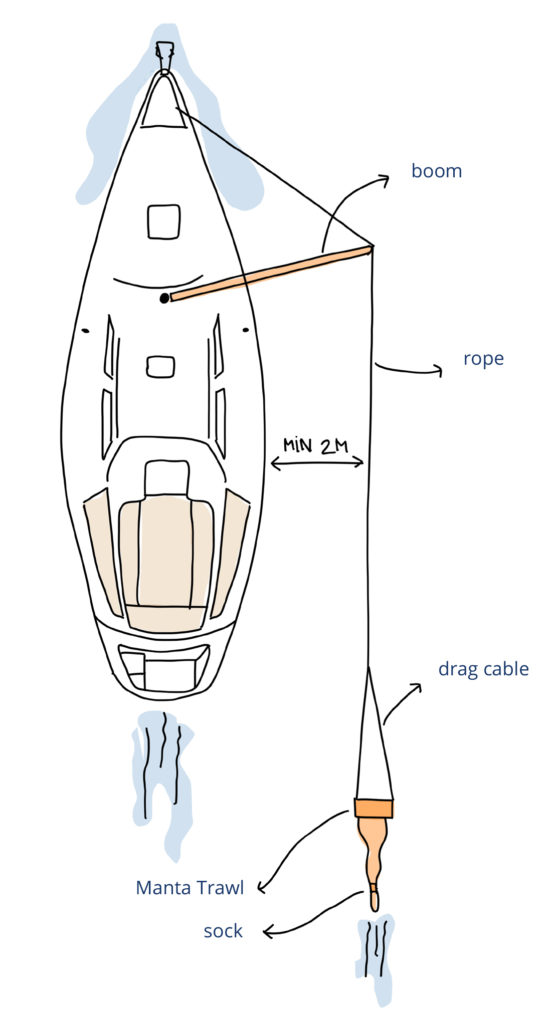 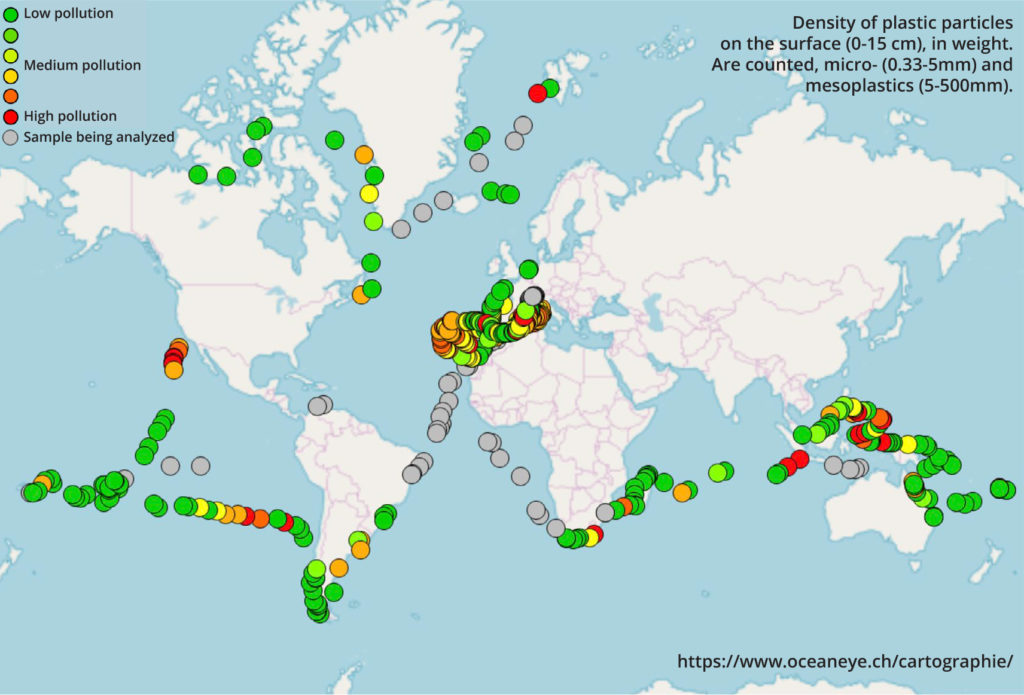 Not all oceans are mapped in the same way. Much data has, for example, already been collected in the Mediterranean Sea, while the East Coast of America is much less studied. By extending our journey to Canada via the St. Lawrence River, we were able to collect samples in a poorly mapped area and thus expand the database. Our goal is to continue this by sailing north for our crossing back to Europe ( through Newfoundland, Greenland and Iceland).

This is the interactive map of microplastic pollution established by Ocean Eye, grouping all the samples collected by volunteer sailboats. It shows a lack of data from the East Coast of the USA, the Canada, Greenland and Iceland. That’s why we would like to extend our trip there to collect unique samples!

Learn everything about microplastic samples in only 15 minutes !

We really recommend you to watch this small video made by Fondation Pacifique. It is another organisation that collects microplastic samples with their sailboat for OceanEye. You will learn everything from the sampling to the analysis of the plastic in the laboratory and what they do with the data afterwards. Enjoy the show!

As we don’t sail every day, we try to take a sample every day we navigate. But for this to happen, all the conditions required by the protocol must also be met. There must be less than 20 knots of wind, we must be at a speed between 2 and 5 knots, the sea must be calm and we must not take samples at night. On top of that, there must not be too much algae floating on the surface, otherwise the net will fill up with algae and the sample is not valid. During some navigation we cannot afford to slow down to take a sample because there are for example strong winds coming, etc. So in the end it’s not that easy to take a sample, eh!

During the first 15 months of the expedition we managed to take 39 samples. It doesn’t seem like a lot but considering the above conditions we are quite satisfied. We were proud to be one of the volunteer sailboats for Ocean Eye that took the most samples in 2020-2021! 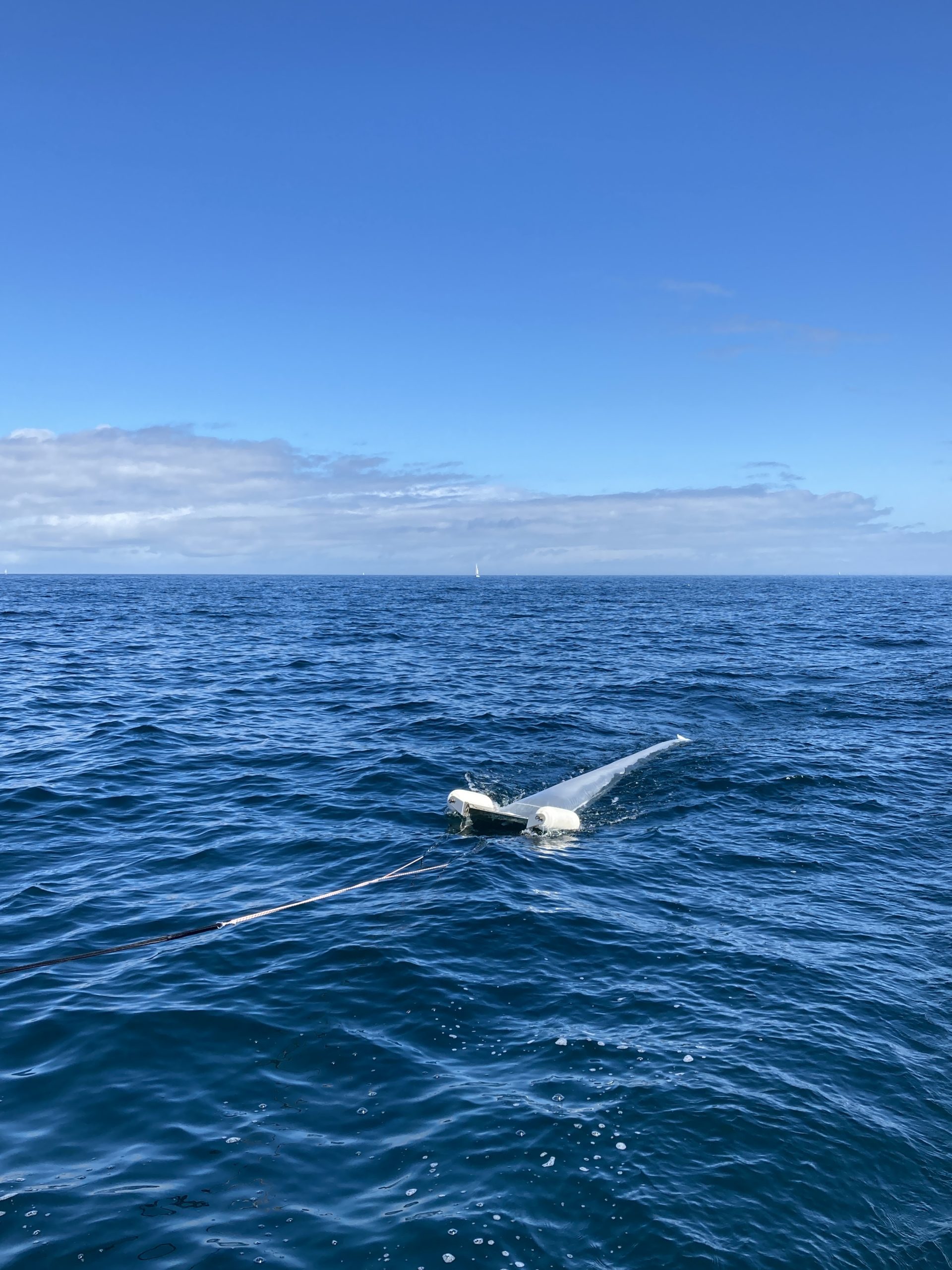 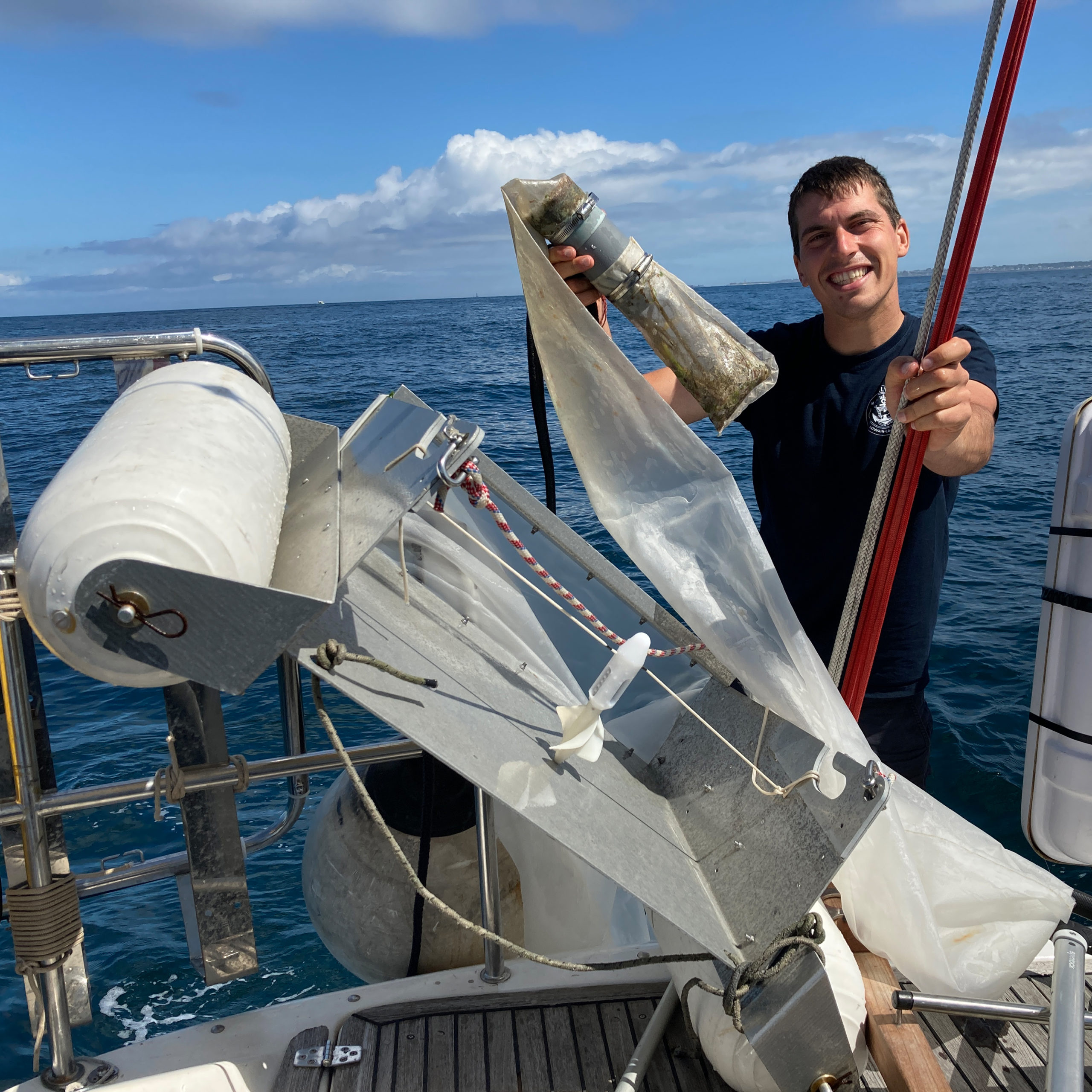 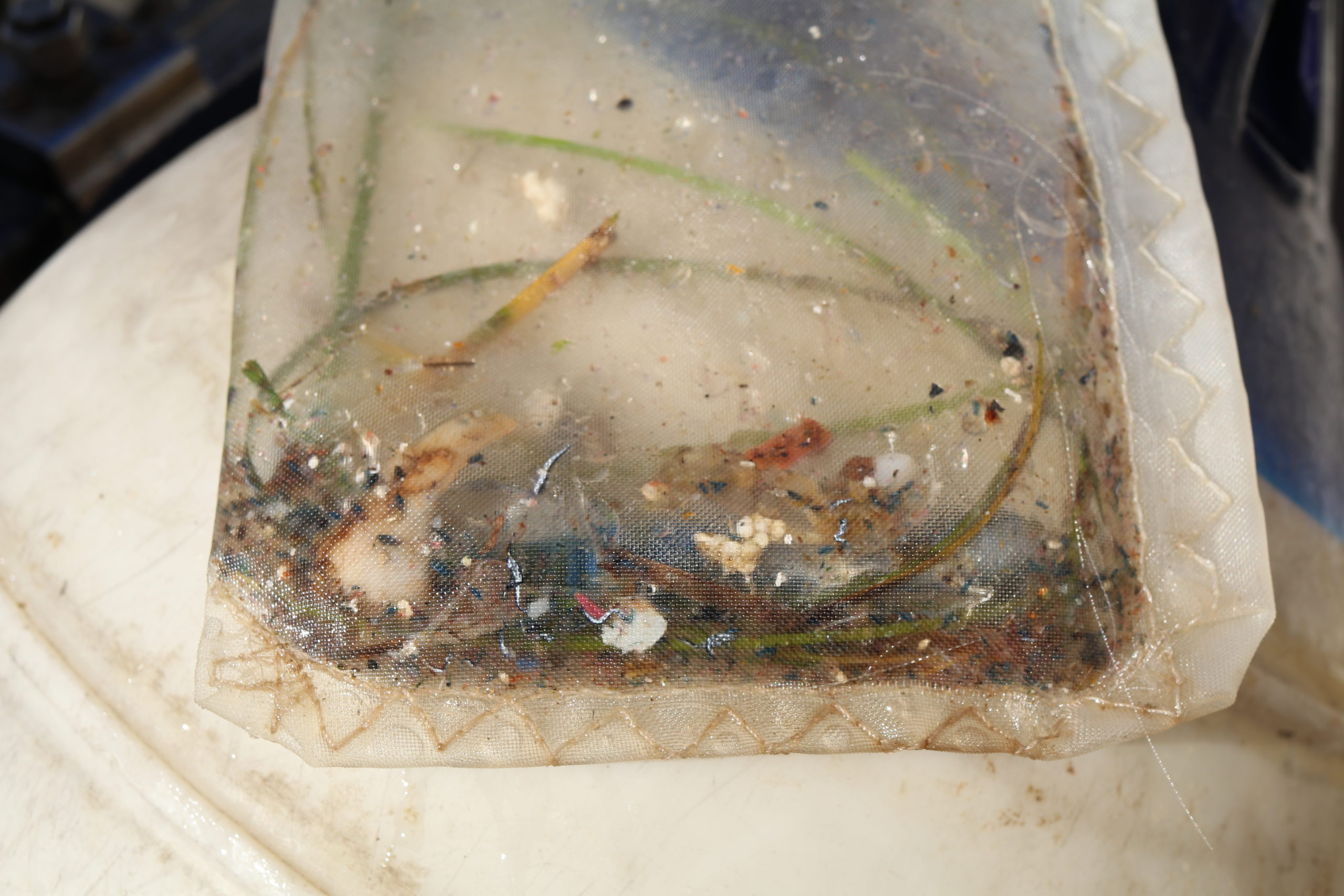 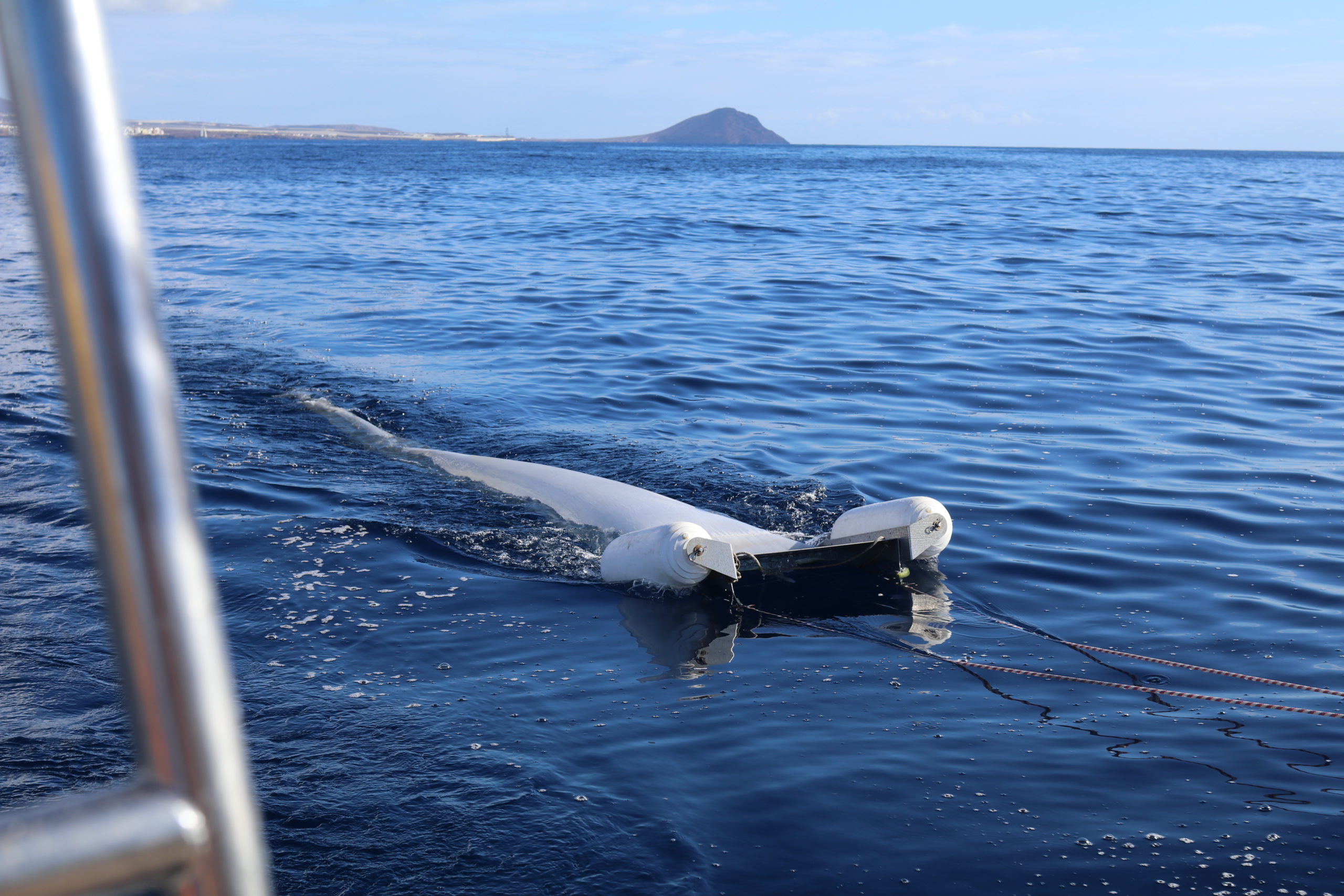 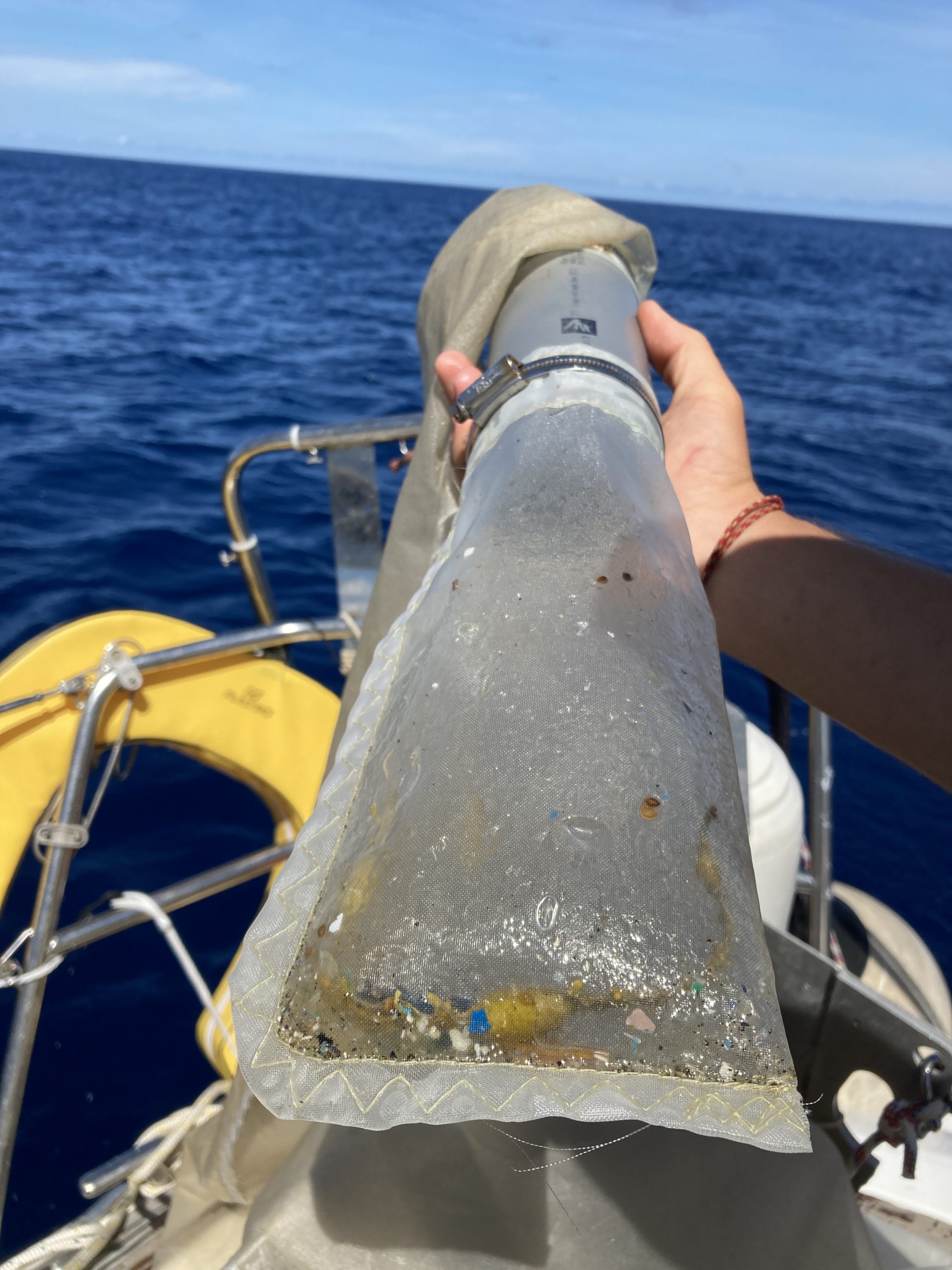 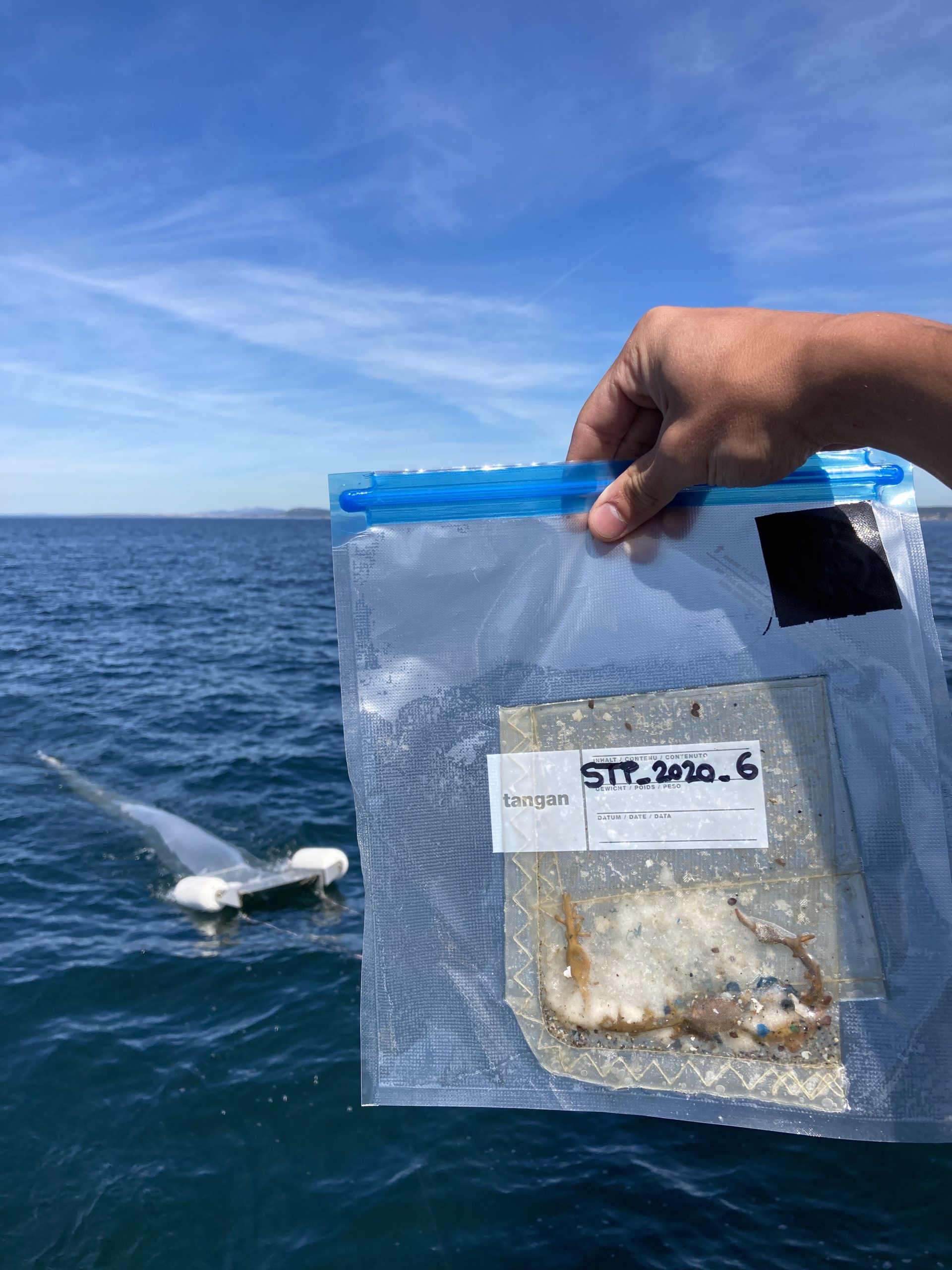 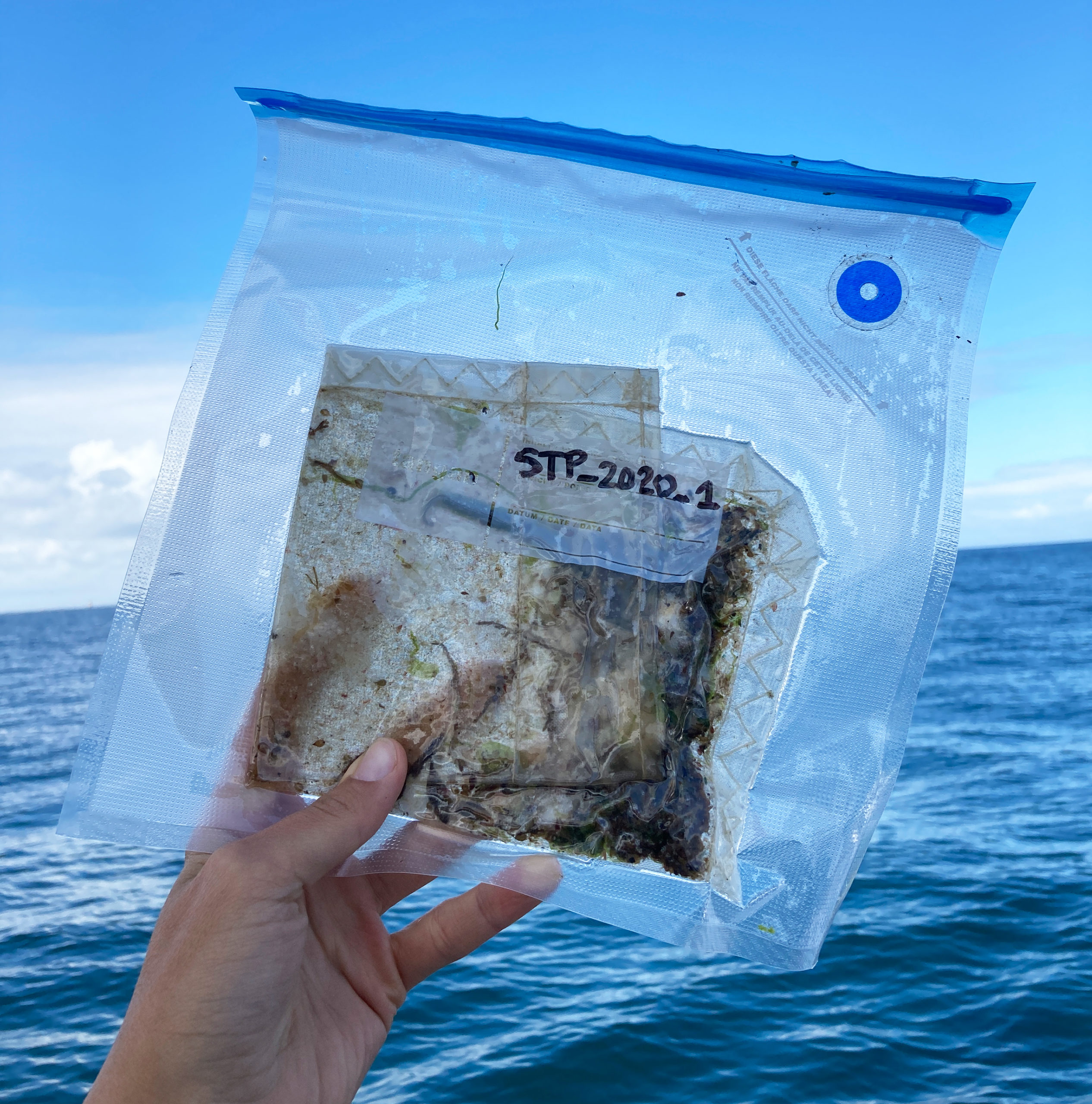 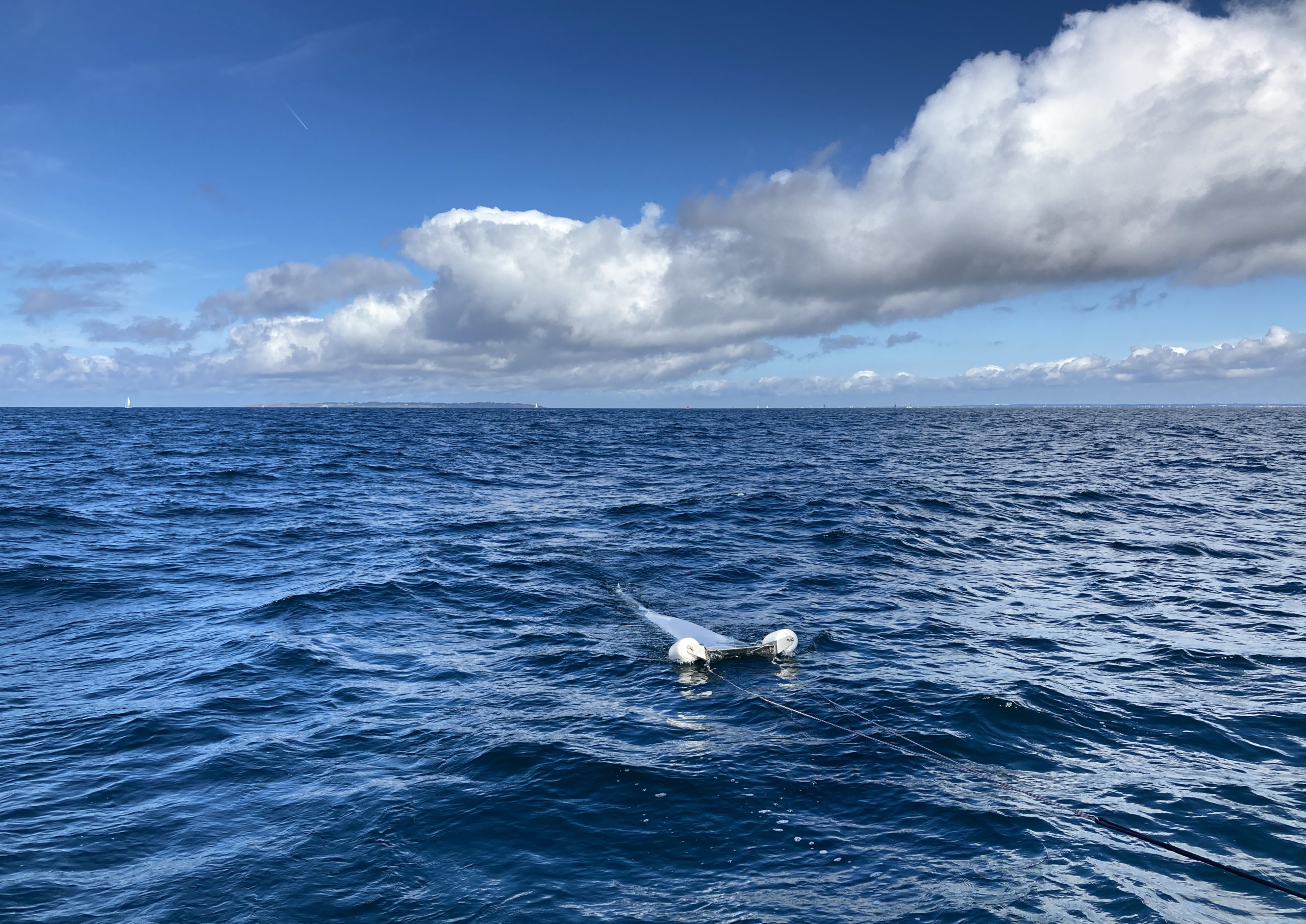 Sharing the issue by exposing our experience, actions and data

Through our website and social networks, we not only share the data collected during our sampling, but also contribute to raise awareness of plastic pollution in the oceans.  While transmitting our experience through the images, we hope to generate a change of mentality and contribute to the awareness of everyone. We also organize conferences within our partners (before, during and after the expedition), to share what we have learned through the project.

It’s amazing to see the power our project already has in bringing local communities together around plastic pollution. We did an awareness week with 5 schools in Martinique with more than 100 students. We also organized about 15 other conferences throughout the trip, as well as workshops in Belgian schools and Quebec universities. We want to continue to raise awareness, even after our return!

It’s your turn to change your habits!

Finally, we want to show everyone the urgency to change their habits. Every little effort is worth it. Many solutions and tips already exist. All we need is a little big more attention every day to reduce plastic waste. The 4Rs are a simple way of reminding us how we can make a difference.

100 more kids aware about plastic pollution in our oceans!

In Martinique, we have made about a hundred students aware of the problem of plastic pollution in the oceans by presenting our project to them. During one week, we had the chance to meet students and eco-delegates from 5 different schools, aged between 10 and 17 years old. We went to present our project to them in their classrooms and then they came on board Sanzaru. We explained and showed them how our sampling net works, but also the challenges of living on board a 10m sailing boat (water autonomy, our renewable energies to produce electricity, safety elements in navigation…). We also challenged them to change their habits with simple gestures such as using a water bottle, reusable bags, bamboo straws … It was incredible to see how few of these children were aware of all this, while living on an island, surrounded by the ocean… It was a super rewarding experience, for them as well as for us!

At the begging of our journey around the Atlantic, we directly saw a lot of plastic waste on the beaches. We decided to add a small challenge to our everyday life and join the mouvement #5minbeachcleanup. Every time we will go on a beach, we will take at least 5 minutes of our time to pick up some waste and avoid that is goes back in the ocean. 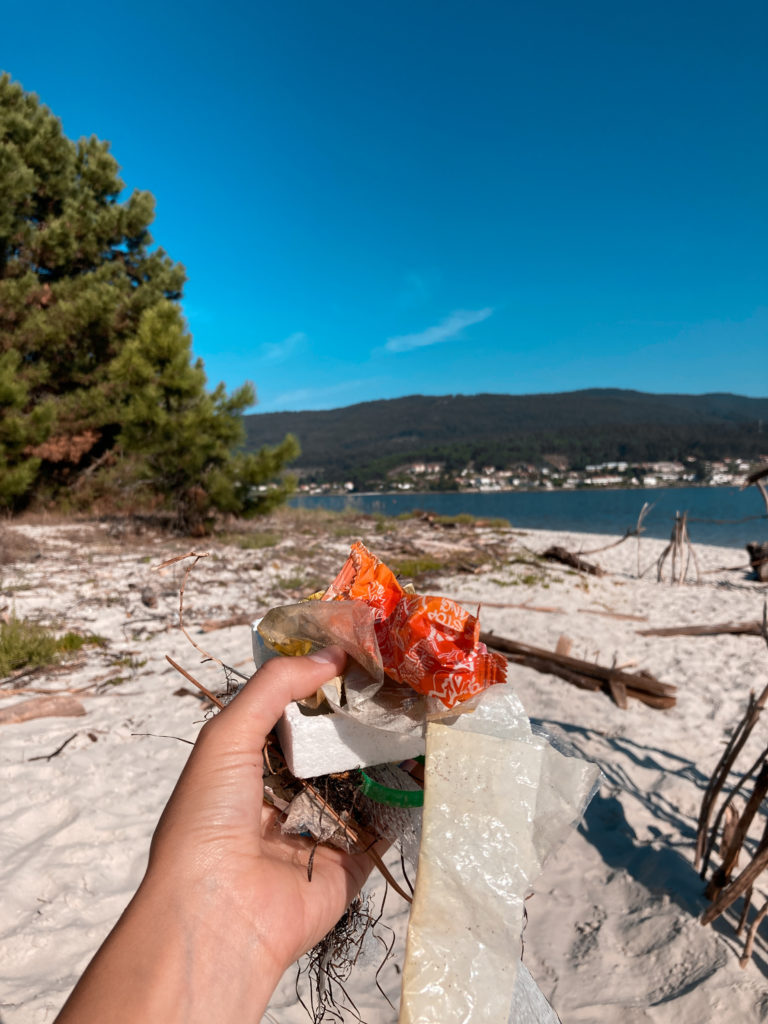 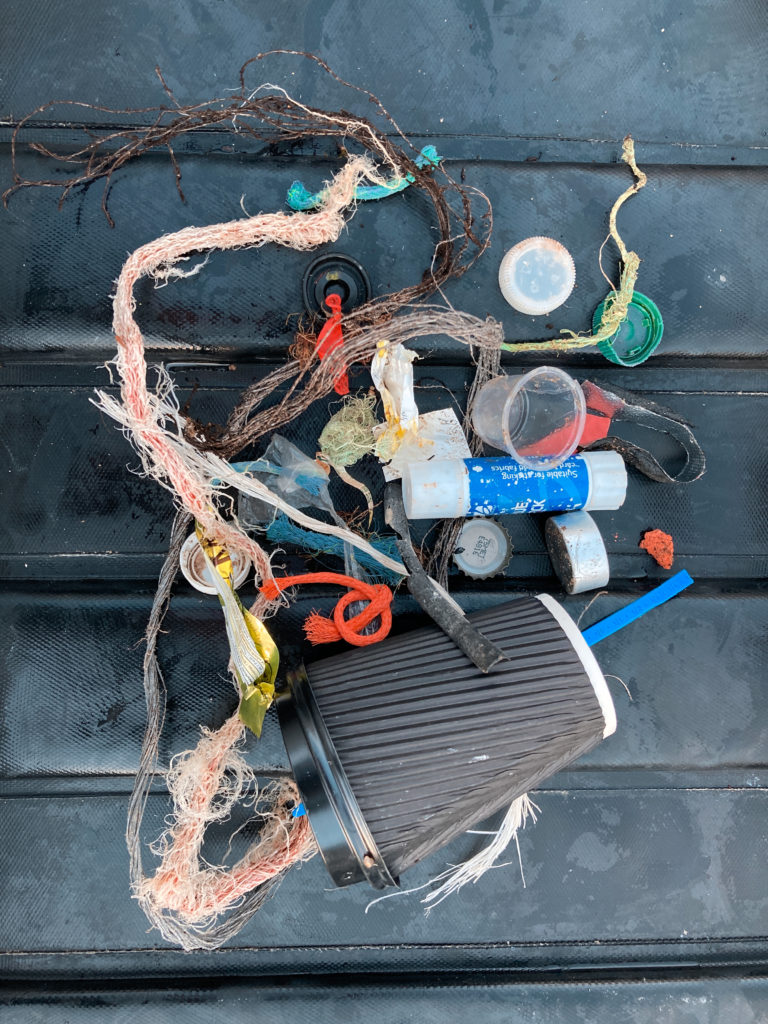 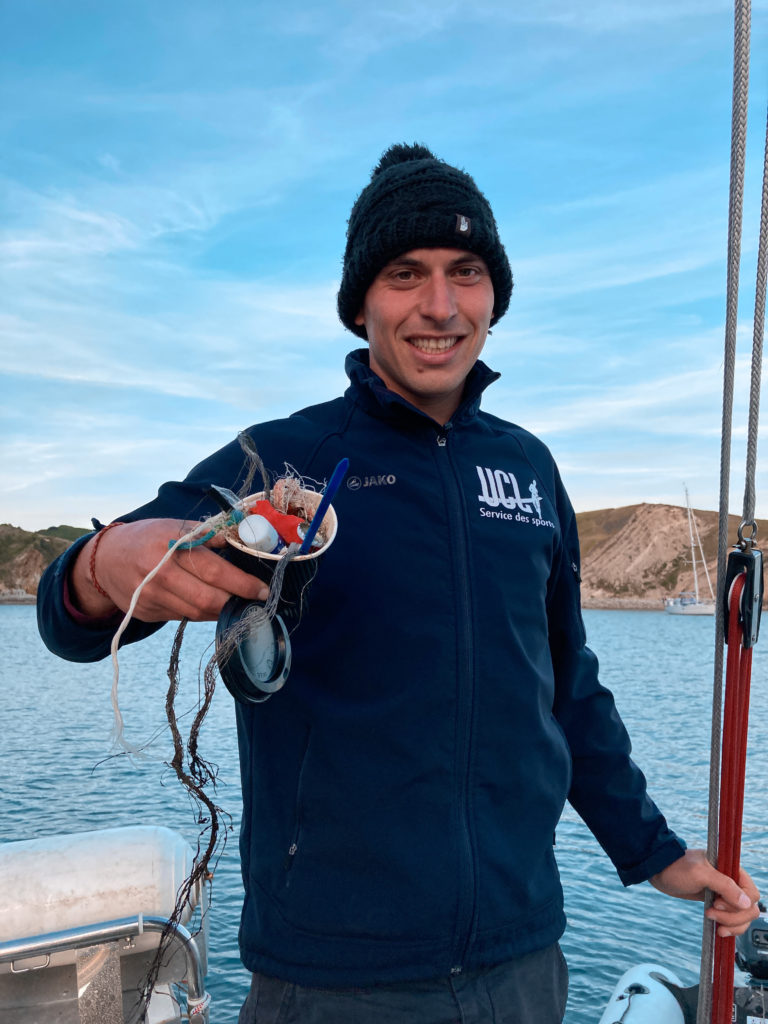 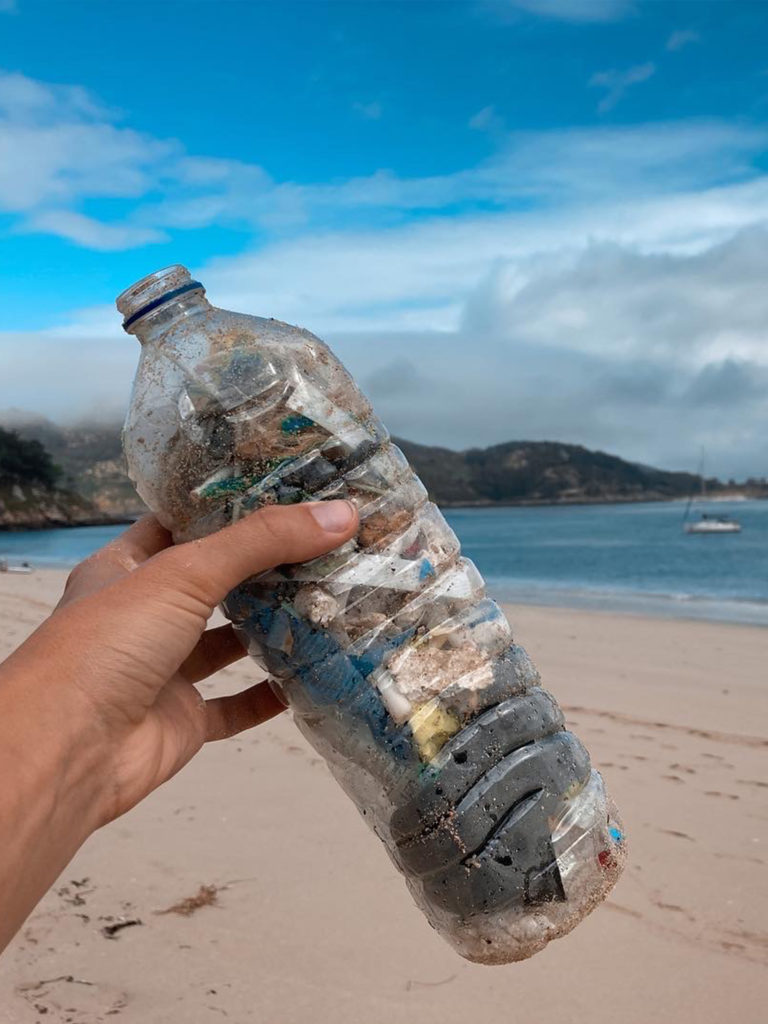 A little anecdote: Our spanish treasure

We were walking on our paradise island when we saw a black plastic thing sticking out of the sand… When we looked a little closer, we realized that it was a fisherman’s trap that was stuck in the sand and must have washed up there during a storm. As we start digging around, we quickly realize that there wasn’t just one trap, but many traps tangled up in each other ! After 2 hours playing archaeologists, we still haven’t finished and the sun starts to set down… So we left our beautiful island to anchor further away, a bit frustrated but determined to come back the next day to finish our work!

24 hours later, we were back, but this time with the whole Wizard crew to help us. With 5 extra pairs of hands, it digs faster! So we dug up a few dozen of traps and several fisherman’s nets, enough to fill our dinghy. The next day we sorted out all the broken traps to make a new one for us. A little reflection and a few screws later, here we were equipped for fishing! All we had to do was throw all the rubbish in the bin. Conclusion: we freed a beautiful beach full of rubbish, preventing it from ending up in the sea later and we have a nice recycled fisherman’s trap! A successful mission, no?